Since World War II, high-performance electrical bulkheads have been sealed by surrounding low-expansion alloy metal pins in a glass or ceramic-filled metal housing. Both glass and ceramic seals offer extremely low leak rates over a wide range of temperatures and pressures. Despite their fragility due to low tensile strength and brittleness, such seals have been successfully used for pressures well over 1000 psi.

The main objective of the seal is to pass electrically conductive copper wire through the bulkhead with no leakage. The only way to do this has been to attach the wire to a pin sealed in glass or ceramic. The development of epoxy sealing technology has eliminated the need for sealed pins. The uninterrupted passage of the cable simplifies installation and lowers its cost. Electrical reliability is increased because the conductor through the seal remains continuous, having no solder terminations as there are with a glass pin seal. The cable is permanently sealed in place within the epoxy, and the cable “UL test”specification typically xceeds the tensile strength of most wires.

During the early 1980s, Pave Technology experimented with proprietary formulations and processes to develop electrical connectors based on epoxy sealing. Sealing to various metal housings with different coefficients of expansion over a temperature range between — 100° C to 200° C proved to be a difficult challenge. 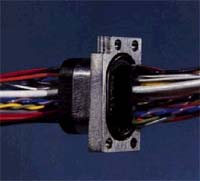 Once a successful bonding process was determined, it became apparent that the process could be used to seal insulated cable as well as solid copper or stainless steel pins. The epoxy seal is normally fused at a much lower temperature than is a glass or ceramic seal, thereby not harming even low-temperature insulations such as polyvinyl chloride (PVC).

Today, epoxy seal technology offers high seal reliability in metal-encapsulated versions using a wide variety of metal shell material such as stainless steel, brass, aluminum, or titanium. However, all-epoxy molded versions can be designed that offer significant cost savings for high volumes and thermal shock resistance for use between — 65° and 150 ° C.

Using such insulations as PTFE, PVC, polyamide, and even foil or braided shields, the design engineer has a much wider range of options with a true hermetic cable passthrough seal on virtually any cable. The epoxy seal blocks the cable conductor, which can be stranded or solid, along with any shielding and insulation. The original electrical characteristics of the cable remain unaffected. This factor can be especially critical for proper impedance control of coaxial cables and temperature reading accuracy of thermocouple wire. Only in high-frequency applications does impedance control break down with the epoxy seal because of dielectric constant differences between cable insulations and epoxy.

Top seal. Designed for the new Propfan jet engine, this seal has a stainless steel housing that protects the shielded PTFE wires at pressures of up to 100 psi of nitrogen, temperatures of -65  to 390° F, severe vibration, and a 50-lb pull test load on individual wires.

PAVE epoxy seals have leak rates typically between the 10-7 to 10-10 std cc/sec. This means that the leak rates of epoxy seals as measured by the helium test are as low or lower than those of glass or ceramic seals. Because it is a thermoset plastic, epoxy will not melt or otherwise deform at elevated temperatures of 200° C. NASA has determined the Pave-Seal 150 to have an acceptable low outgassing rate of 0.20 percent TML and 0.01 percent CVCM as determined by tests in accordance with ASTM E-595-84.

Leak Testing
At first glance, an epoxy-sealed cable passthrough would appear to have several significant leak paths: the stranded conductor, insulation (especially PTFE), any shielding, and the epoxy bond between the cable and any metal housing. Hermetic seal performance for vacuum or pressure applications is typically defined by a leak-rate specification. Such specifications may be defined by: a hydrostatic test at a given pressure; a bubble test with an inert gas such as nitrogen with a bubble solution of water or Freon at a given pressure; a Freon leak test using a halogen leak detector; or a helium leak test using a mass spectrometer at vacuum or a given pressure. The most widely accepted leak test is the helium leak test with a calibrated leak rate. Most high-performance glass or ceramic seals have leak rates of less than 1×10-5std cc/sec at 1 atmosphere differential.

Applications
The first major product application for Pave epoxy seals was in providing electrical seals in nuclear glove boxes, which are shielded, mechanical arm- or gloveport-equipped sealed enclosures for handling hazardous materials. Both the cable passthrough as well as epoxy-sealed multipin connector versions were used in the tritium supply system built by Monsanto Research Corp. for the Princeton University Tokamak. All epoxy seals had to pass a helium leak rate of less than 1 x 10 -8 cc/sec at vacuum. Because of the cleanliness of epoxy seals, major semiconductor companies are beginning to use them in the vacuum wafer-handling systems.

For critical satellite and components testing, most major space simulation chambers operated by aerospace contractors now have complicated epoxy sealed passthroughs-some of which may have well over 100 conductors and 100-ft cables-for their bulkhead electrical connections. Ten years ago, all such seals were made of glass or ceramic requiring costly cable harnessing to the pins.

Epoxies offer high chemical resistance to gasolines and oils, acids, and alkaline solutions. Epoxy passthroughs are extensively used in mass flowmeters to seal off the electronics and see a very wide range of chemicals. The elimination of a pin connection at the bulkhead is considered a major improvement in mass flowmeter reliability. Epoxy seals are also being extensively used in underground gasoline storage tanks as the sealed cable passthrough to the computerized leak detection system recently mandated by Congress for all such tanks. 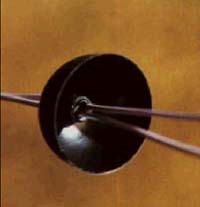 Weight-sensitive application. This egg-shaped, thin-wall passthrough seal, which is vacuum rated, protects a
missile nozzle against submersion in shallow water.

An epoxy-molded version was developed for use in the F-15 fighter jet’s hydraulic engine controls. The “mini”-epoxy seal must seal two #26 PTFE wires in hydraulic fluid at 10 psi. In addition, a very small dimensional seal package was made available with a 3/8-in diameter and a 0.300-in molded seal length. Even minimal pressure differentials can normally require high performance seals. A Viton 0-ring gland seal is used to seal to the bulkhead.Pave epoxy seals are used in military infrared systems, providing complex, color-coded cable seals of a wide variety of PTFE-insulated cables rated, in some cases, to 7.5 kV. Epoxy seals are also replacing traditional glass seals in helicopter fuel connectors. Among the specifications that Pave epoxy seals comply with are: MIL-STD-810C for altitude, mechanical shock, and humidity; MIL-STD-810C Method 503.1, Procedure 1 for thermal shock; IEC 68-2-6 test FC, Procedure B3 for vibration; and MIL-STD-202E Method 107D for thermal shock.

To date, most epoxy seal designs utilize either an 0-ring gland or face seal. Metal-to-metal NPT seals or metal-to-plastic seals using a standard tube fitting have been successfully used. TIG or electron-beam welded designs that minimize thermal-shock heat transfer from the welding can also be applied.

With a compressive strength of 948 kg/cm2, Pave epoxy seals are being used in pressures up to 20,000 psi. Fatigue factors are critical as pressures increase, particularly when also coupled with thermal cycling.

The nature of any pressure and/or temperature cycling over a projected time factor must be given careful engineering consideration in both the internal and external seal design to properly avoid premature seal failure.

Minimum conductor spacing and seal length must be determined based on fatigue factors. The minimum conductor seal length of 0.250 in for low pressures will increase rapidly to over 1 in for 10,000 psi pressures. Glass or ceramic seals with their high compression bond as they “shrink” around the pins, are able to have much shorter seal length or thickness over a wider temperature range. Where the overall seal length is not especially critical, epoxy seals can replace glass seals. Proof pressure testing of one and a half to three times the normal operating pressures is recommended to assure reliability. Typical applications include underwater sonar systems and oil drilling.

Unique designs are possible using epoxy’s moldability. An egg-shaped, thin-wall passthrough seals a missile nozzle from submersion in shallow water. The design also has to seal for a vacuum.

Being extremely weight sensitive, the walls are only 0.010 to 0.020 inch thick. Sealing a 1-in diameter space, the egg shape allows for an even distribution of the stress caused by the pressures and prevents the collapse of the extremely thin wall. Seal weight is only 2 grams.

High density of electrical conductors is another advantage of an epoxy seal, using either round or flat cable. A Pave-flex sealing of a combination of PTFE-insulated wire and a custom designed and fabricated polyamid flex circuit is used in medical centrifuges. Another example of high density is as many as 400 #28 Teflon-insulated wires sealed in a 1.5-in diameter space for high-speed computers.

Specially designed flex circuits with densities as high as 100 conductors per inch can also be offered in hermetic seals. PCBs also lend themselves to hermetic epoxy sealing technology through bulkheads.

The design flexibility and high performance of today’s epoxy seal technology will continue to find new applications as the demand for high-performance seals grows along with the high growth in electronics for both large and small applications.